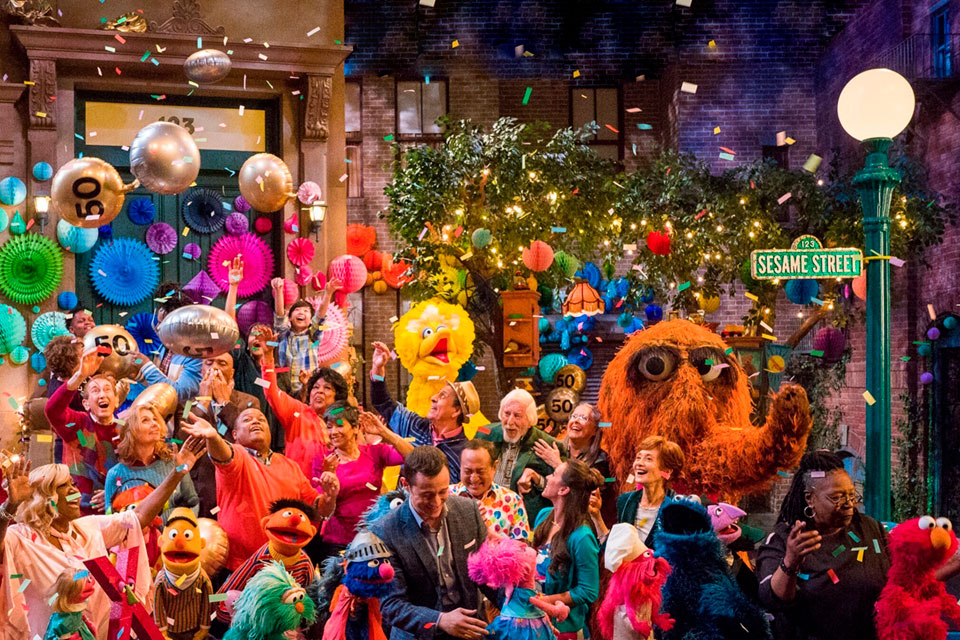 Blink and you might miss it, but Burnett followed a cartoon about a witch called Wanda, which was loaded with words beginning with the letter w.

"Wow, Wanda the Witch is weird," Burnett commented. And then — poof — she was gone.

That show was "Sesame Street" and Burnett, like a lot of kids, was instantly hooked. She would return to the show multiple times, including visits to demonstrate to pre-school viewers where her nose was and to smooch a rubber duckie.

"I was a big fan. I would have done anything they wanted me to do," she said.

"I loved being exposed to all that goodness and humor."

This first episode of "Sesame Street" — sponsored by the letters W, S and E and the numbers 2 and 3 — aired in the fall of 1969. It was a turbulent time in America, rocked by the Vietnam War and raw from the assassination of Dr. Martin Luther King the year before. The media, like today, was going through disruption. (View the first episode below)

Newt Minow, who was the Federal Communications Commission chairman at the time, famously said TV was becoming "a vast wasteland." Like today, there was lots of content, but it wasn't necessarily quality. 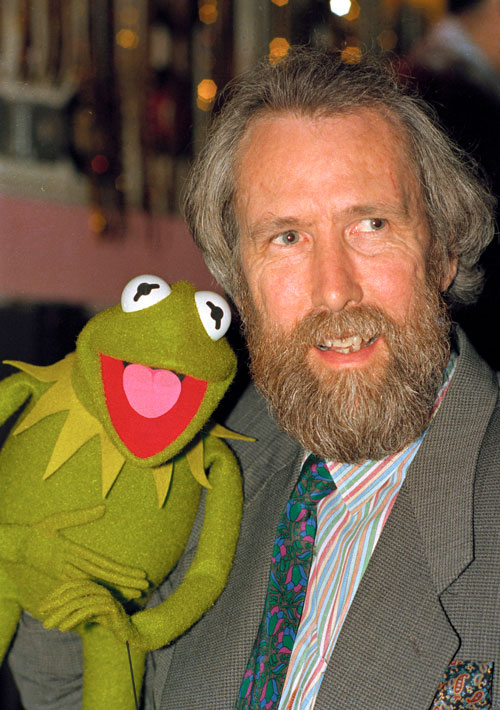 "It wasn't about if kids were learning from TV, it was about what they were learning from TV," said Steve Youngwood, the chief operating officer of Sesame Workshop. "If they could harness that power to teach them the alphabet and their numbers as opposed to the words to beer commercials, you may be able to make a really big difference."

No one else was doing it. Children's programming at the time was made up of shows like "Captain Kangaroo," ''Romper Room" and the violent skirmishes between "Tom & Jerry." ''Mr. Rogers' Neighborhood" was lovely, but it was mostly teaching social skills.

"There was nothing even remotely that contained any educational component at all for children," said Phillip Levine, a professor of economics at Wellesley College who has studied the show. "'Sesame Street' was 100% about education."

The show was designed by education professionals and child psychologists with one goal: to help low-income and minority students aged 2-5 overcome some of the deficiencies they had when entering school. Social scientists had long noted white and higher-income kids were often better prepared. 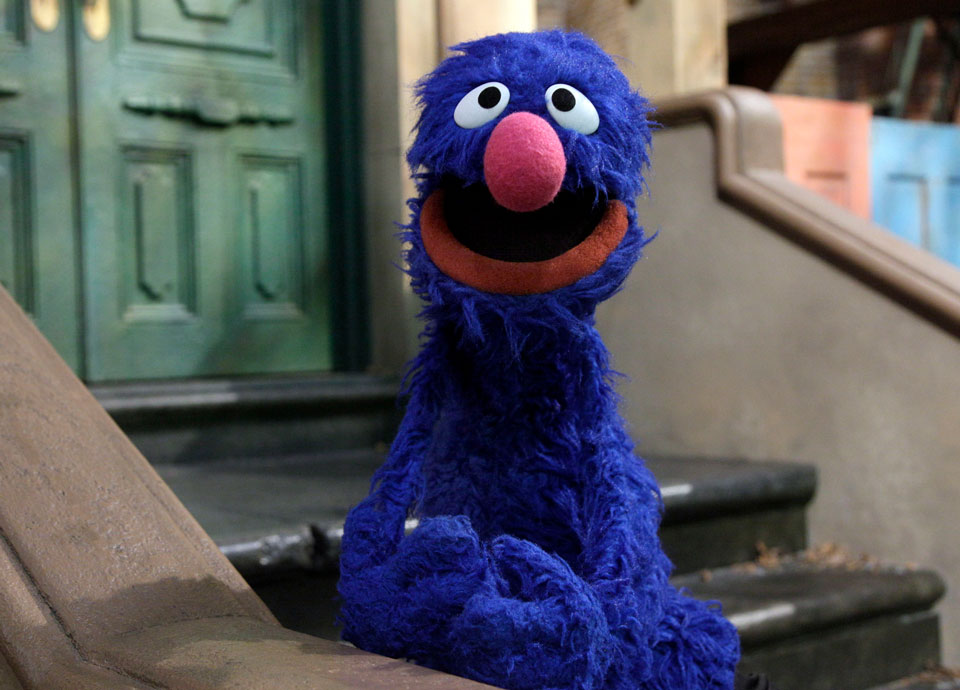 In this April 11, 2011 photo, Grover is posed on the set of "Sesame Street," in New York. (AP Photo/Richard Drew, File)So, it wasn't an accident that the show was set on an urban street with a multicultural cast. Diversity and inclusion were baked into the show. Monsters, humans and animals all lived together peacefully.

Bert, Ernie and the gang made an instant impression on actress Sonia Manzano. She saw a neighborhood that looked like hers. She saw people who looked like her. She would become a cast member, Maria, on the show, starring and writing for it from 1971-2015, including getting married on air.

"I was raised without seeing people of color on television. So, when I was given the opportunity to be a person of color on television, I jumped at it," said Manzano, who is of Latino descent. "And I think I was successful as Maria because I never forgot that there could be a little kid like me watching television and forming ideas about the world."

Over the years, "Sesame Street" has welcomed many more. It became the first children's program to feature someone with Down syndrome. It's had puppets with HIV and in foster care, invited children in wheelchairs, dealt with topics like jailed parents, homelessness, women's rights, military families and even girls singing about loving their hair.

It introduced the bilingual Rosita — the first Latina Muppet — in 1991. Julia, a 4-year-old Muppet with autism came in 2017 and this year has offered help for kids whose parents are dealing with addiction and recovery. So important is the show that PETA recently asked for the creation of a vegan Muppet. 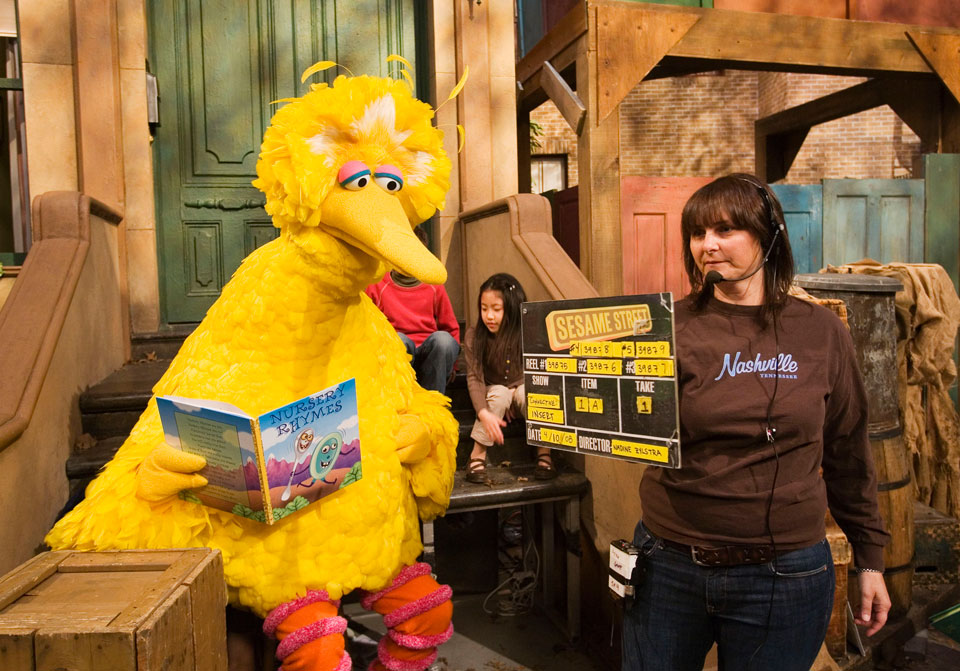 This April 10, 2008 file photo shows Lynn Finkel, stage manager for "Sesame Street," slates a taping with Big Bird, performed by Caroll Spinney, in New York. The popular children's TV show is celebrating its 50th year. (AP Photo/Mark Lennihan, File)"We are a mirror to society here even though we're dealing with birds and chickens and monsters," said Matt Vogel, the puppeteer who portrays Big Bird and the Count and who grew up watching "Sesame Street."

When actor Will Lee, who played the grocer Mr. Hooper, died in 1982, the show explained death to children. When Big Bird lost his nest to a hurricane, the community rebuilt his home. To help kids after 9/11, Elmo was left traumatized by a fire at Hooper's store but was soothingly told that firefighters were there to help.

"We see a need and we meet that need because I feel like we have a voice that's loud enough that can do that — that can reach people and make a difference," Vogel said. "Our mission is to make kids smarter, stronger and kinder and that those lessons that we impart to them stay with them."

"While the numbers and the colors and the sizes and the shapes are all incredibly important, so is that social-emotional development that children need," he said.

"'Sesame Street' deals with the reality of what's going on with the kids today.

"And 'Sesame Street' does it in such a child-friendly, age-appropriate, developmentally-appropriate way that not only grabs kids' attention, but also all the providers," Moe said.

Celebrity appearances — starting with Burnett and now numbering 650 — aren't just a fun component of the show, they're part of the lesson. From Janelle Monae to Sarah Jessica Parker, from Anderson Cooper to Danny DeVito — they're all part of an attempt to lure parents to watch as well.

"When parents watch the show with their kids, the learning is deeper because you have a conversation about what you watched together.

"You talk about it," said Benjamin Lehmann, executive producer. "The parents are there to scaffold on the lessons."

In the adults' honor are characters who go over the heads of young viewers — Ethel Mermaid, Baa Baa Walters and Alistair Cookie — not to mention spoofs like "Orange Is the New Snack," ''Grouch Eye for the Nice Guy" and "Upside Downton Abbey."

Not everyone has adored the show, especially those who grouse about federal funds going to a nonprofit that earns millions on licensing for everything from lunch boxes and toys to diapers and commercials for Farmers Insurance.

Big Bird in 2012 found himself unexpectedly in the presidential race when Mitt Romney said he would defund public broadcasting if elected. "I love Big Bird," then-President Barack Obama retorted. (On "Saturday Night Live," Big Bird insisted he didn't want to "ruffle any feathers.")

In 2015, the longtime PBS show inked a five-year pact with HBO that gave the premium cable channel the right to air new episodes nine months before they air on PBS. That prompted some criticism that Sesame Workshop favored viewers who could afford HBO over those who could not. But since the HBO deal, the show has not gotten any federal funding.

Before each season, educators and creators gather to align the curriculum with the latest thinking. In the past, for example, narrative stories were broken up into little chunks because the thinking at the time was that kids couldn't follow a long story. That turns out not to be true, and "Sesame Street" now delivers 10-minute narratives.

Sesame Workshop has also pared episodes from an hour to 30 minutes, and the show is now shot on 4K, with the creators knowing that most children are watching on tablets or phones.

The impact of "Sesame Street"

Does it all really help? In 2016, Levine and economist Melissa Kearney at the University of Maryland produced one of the most widely cited studies about the impact of "Sesame Street."

They compared households that got the show with those who didn't and found that the children exposed to "Sesame Street" were 14% more likely to be enrolled in the correct grade level for their age at middle and high school.

"There's no question that the introduction of 'Sesame Street' was a good thing," Levine said. "Early childhood intervention does have the ability to improve lifelong learning among children."

Some shows have lasted longer — "Meet the Press" and "The Tonight Show" among them — but few have had as big a cultural impact. "Sesame Street" is shown in more than 150 countries, has won 193 Emmys, 10 Grammys and will get a 2019 Kennedy Center Honor for lifetime artistic achievement in December, the first time a television program will receive the award.

Music has always been a big part of the show and its song "Rubber Duckie" peaked at No. 16 on the Billboard charts in 1970. "Sing," which premiered on the show, went even higher, hitting No. 3 on Billboard in 1973 when the Carpenters recorded it.

There have been a few bumps in the road, like Roosevelt Franklin, an early puppet whose stereotypical African American dialect offended many. Katy Perry showed a little too much Katy Perry for some parents in 2010 and Cookie Monster, in the face of an obesity epidemic, had to moderate his adoration of cookies to "a sometimes food."

But the show is still going strong despite an explosion of cheap online alternatives with bright colors and songs — like "Baby Shark" — all competing for preschoolers' eyeballs. One recent study found kids as young as 2 had a daily screen time diet of 3 hours.

"There's a different version of a wasteland right now. And in some ways that motivates us even more to make sure that we, and the industry at large, doesn't give into that," Youngwood said. "We have to earn their time every day as opposed to the view that it's an entitlement."