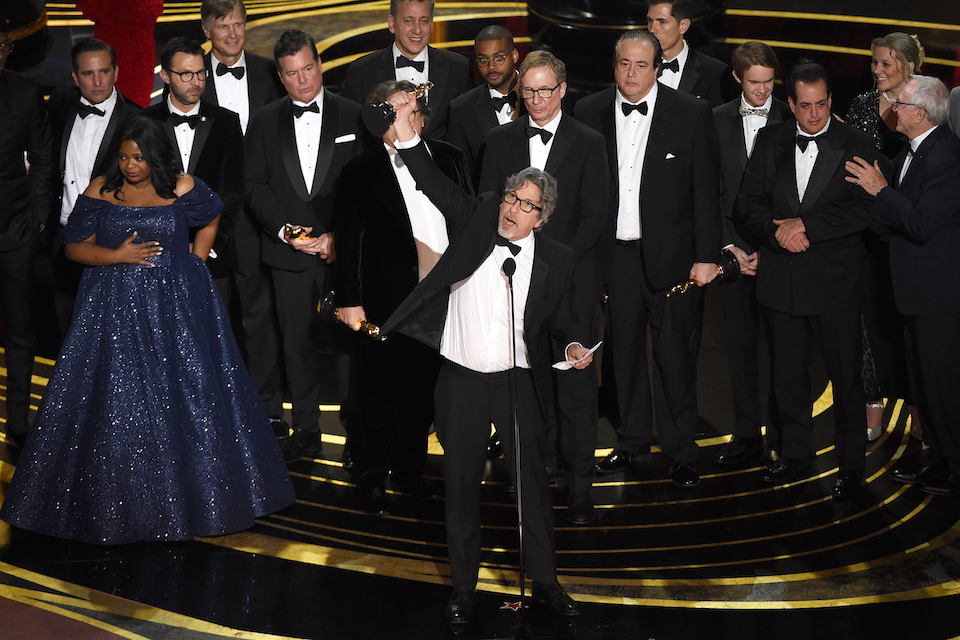 LOS ANGELES (AP) — The segregation-era road-trip drama "Green Book" was crowned best picture at the 91st Academy Awards on Sunday, handing Hollywood's top award to a film seen as a feel-good throwback by some and ridiculed as an outdated inversion of "Driving Miss Daisy" by others.

In a year where Hollywood could have made history by bestowing best picture on Netflix ("Roma") or Marvel ("Black Panther") for the first time, the motion picture academy instead threw its fullest support behind a traditional interracial buddy tale that proved as popular as it was divisive.

But Peter Farrelly's "Green Book" weathered criticism that it was retrograde and inauthentic to triumph over more acclaimed films and bigger box-office successes.

It was an unexpected finale to a brisk, hostless ceremony that was awash in historic wins for diversity, including Spike Lee's first competitive Oscar. 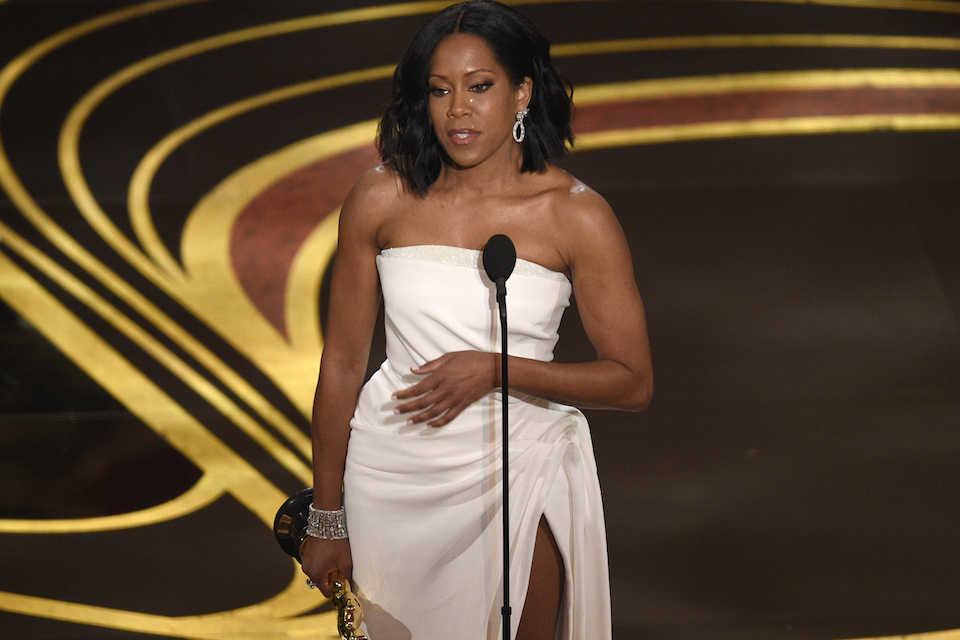 Regina King accepts the award for best performance by an actress in a supporting role for "If Beale Street Could Talk" at the Oscars on Sunday, Feb. 24, 2019, at the Dolby Theatre in Los Angeles. (Photo by Chris Pizzello/Invision/AP)More women and more individual black nominees won than ever before.

The Oscars otherwise spread awards around for Ryan Coogler's superhero sensation "Black Panther," Alfonso Cuaron's black-and-white personal epic "Roma" and the Freddie Mercury biopic "Bohemian Rhapsody."Lee, whose "Do the Right Thing" came out the same year that "Driving Miss Daisy" won best picture, was among those most visibly upset by the award handed to "Green Book."

After presenter Julia Roberts announced it, Lee stood up, waved his hands in disgust and appeared to try to leave the Dolby Theatre before returning. 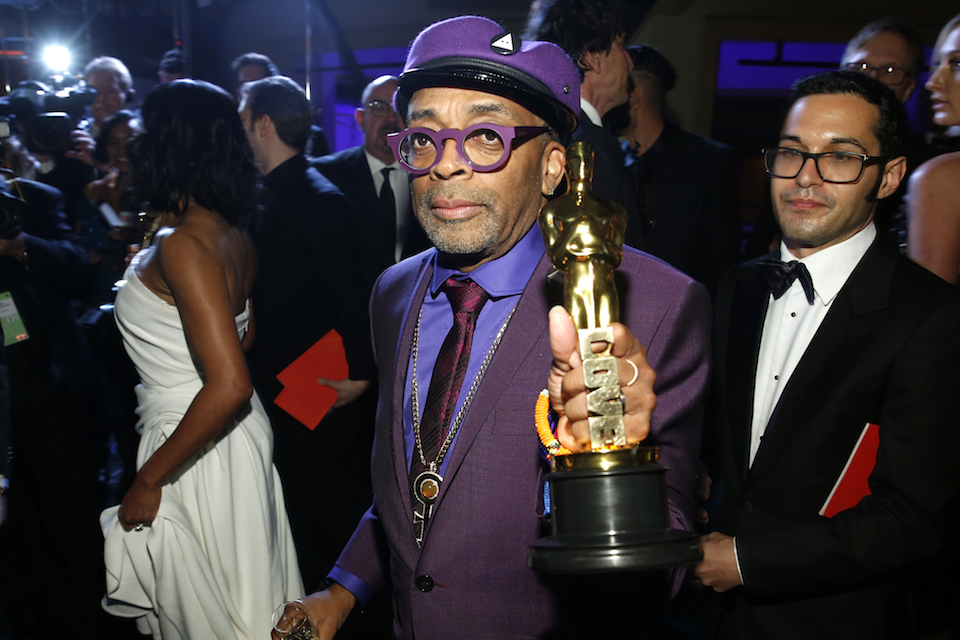 Spike Lee, winner of the award for best adapted screenplay for "BlacKkKlansman", attends the Governors Ball after the Oscars on Sunday, Feb. 24, 2019, at the Dolby Theatre in Los Angeles. (Photo by Eric Jamison/Invision/AP)"Green Book" also won best supporting actor for Mahershala Ali and best original screenplay.

"The whole story is about love," said Farrelly, a filmmaker best known for broad comedies like "Dumb and Dumber" and "There's Something About Mary."

''It's about loving each other despite the differences and find out the truth about who we are. We're the same people."

Backstage, Lee clutched a glass of champagne while reflecting on the 30 years between "Driving Miss Daisy" and "Green Book."

''I'm snake bit," he said, laughing. "Every time somebody's driving somebody, I lose!"

Lee's win for best adapted screenplay for his white supremacist drama "BlacKkKlansman," an award he shared with three co-writers, gave the ceremony its signature moment.

The crowd rose in a standing ovation, Lee leapt into the arms of presenter Samuel L. Jackson and even the backstage press room burst into applause.

"Let's be on the right side of history. Make the moral choice between love and hate," said Lee, who was given an honorary Oscar in 2015.

"Let's do the right thing! You knew I had to get that in there." 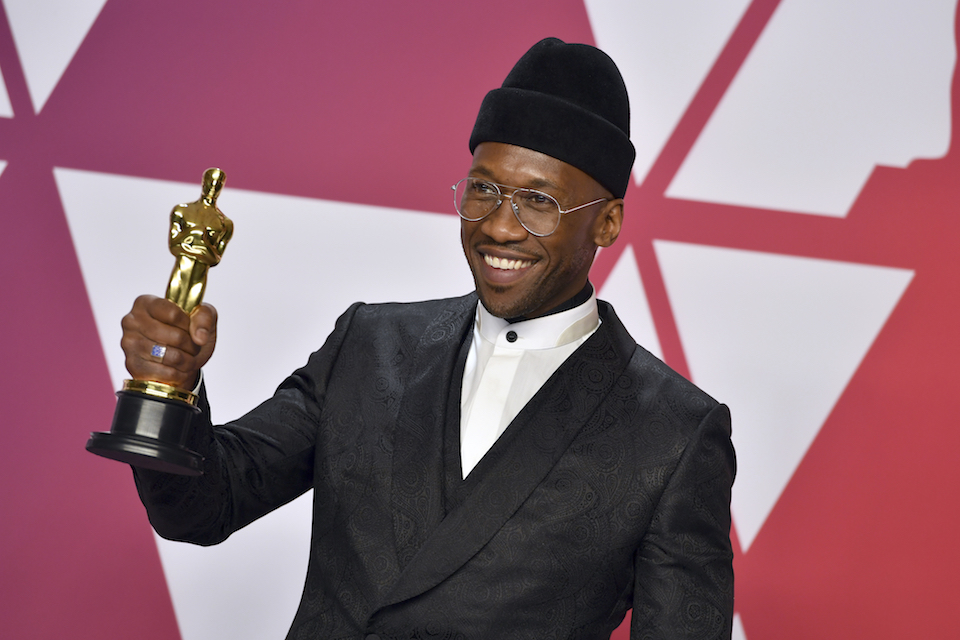 Mahershala Ali poses with the award for best performance by an actor in a supporting role for "Green Book" in the press room at the Oscars on Sunday, Feb. 24, 2019, at the Dolby Theatre in Los Angeles. (Photo by Jordan Strauss/Invision/AP)

"Ooo. It's genuinely quite stressful," said a staggered Colman, who later turned to Close to say she was her idol,

"And this is not how I wanted it to be."

Cuaron and his "Three Amigos" countrymen — Alejandro Inarritu and Guillermo del Toro, who presented Cuaron with best picture — have had a stranglehold on the category, winning five of the last six years.

Cuaron, who becoming the first director to ever win for serving as his own director of photography, referenced an especially international crop of nominees in one of his three acceptance speeches.

"When asked about the New Wave, Claude Chabrol said there are no waves, there is only the ocean," said Cuaron, referring to the French filmmaker.

"The nominees tonight have proven that we are a part of the same ocean."

The wins for "Roma" gave Netflix its most significant awards yet but "Green Book" denied the streaming giant the best-picture win it dearly sought.

Netflix remains to some a contentious force in Hollywood, since it largely bypasses theaters. 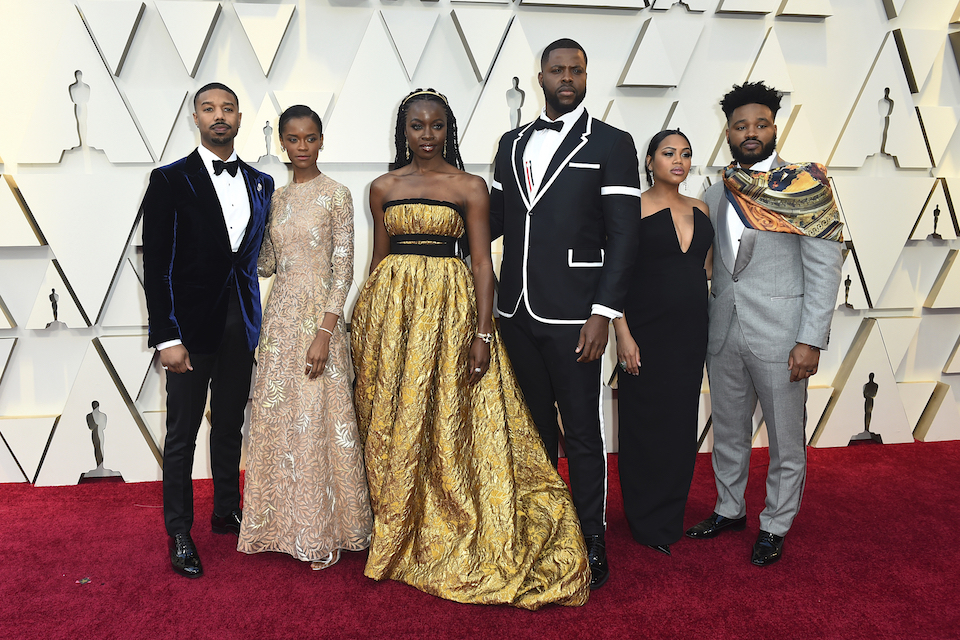 Michael B. Jordan, from left, Letitia Wright, Danai Guriraz, Winston Duke, Zinzi Evans, and Ryan Coogler arrive at the Oscars on Sunday, Feb. 24, 2019, at the Dolby Theatre in Los Angeles. (Photo by Jordan Strauss/Invision/AP)The wins for "Black Panther" — along with best animated film winner "Spider-Man: Into the Spider Verse" — meant the first Academy Awards for Marvel, the most consistent blockbuster factor Hollywood has ever seen.

Beachler had been the first African-American to ever be nominated in the category. Beachler and Carter became just the second and third black women to win non-acting Oscars.

"Finally, the door is wide open."

Two years after winning for his role in "Moonlight," Mahershala Ali won again for his supporting performance in "Green Book" — a role many said was really a lead.

Ali is the second black actor to win two Oscars following Denzel Washington, who won for "Glory" and "Training Day." Ali dedicated the award to his grandmother.

"Bohemian Rhapsody," which kicked off the ABC telecast with a performance by Queen, won four awards despite pans from many critics and sexual assault allegations against its director, Bryan Singer, who was fired in mid-production for not showing up.

Its star, Rami Malek, won best actor for his full-bodied and prosthetic teeth-aided performance, and the film was honored for editing, sound mixing and sound editing.

"We made a film about a gay man, an immigrant who lived his life unapologetically himself," said Malek who after the ceremony collapsed and was attended to by medics.

"We're longing for stories like this. I am the son of immigrants from Egypt. I'm a first-generation American, and part of my story is being written right now."

Queen launched Sunday's ceremony with a medley of hits that gave the awards a distinctly Grammy-like flavor, as Hollywood's most prestigious ceremony sought to prove that it's still "champion of the world" after last year's record-low ratings.

To compensate for a lack of host, the motion picture academy leaned on its presenters, including an ornately outfitted Melissa McCarthy and David Tyree Henry and a Keegan-Michael Key who floated down like Mary Poppins.

Rudolph summarized a rocky Oscar preamble that featured numerous missteps and backtracks by the Academy of Motion Picture Arts and Sciences: "There is no host, there won't be a popular movie category and Mexico is not paying for the wall."

The trio then presented best supporting actress to Regina King for her pained matriarch in Barry Jenkins' James Baldwin adaptation "If Beale Street Could Talk."

The crowd gave King a standing ovation for her first Oscar. 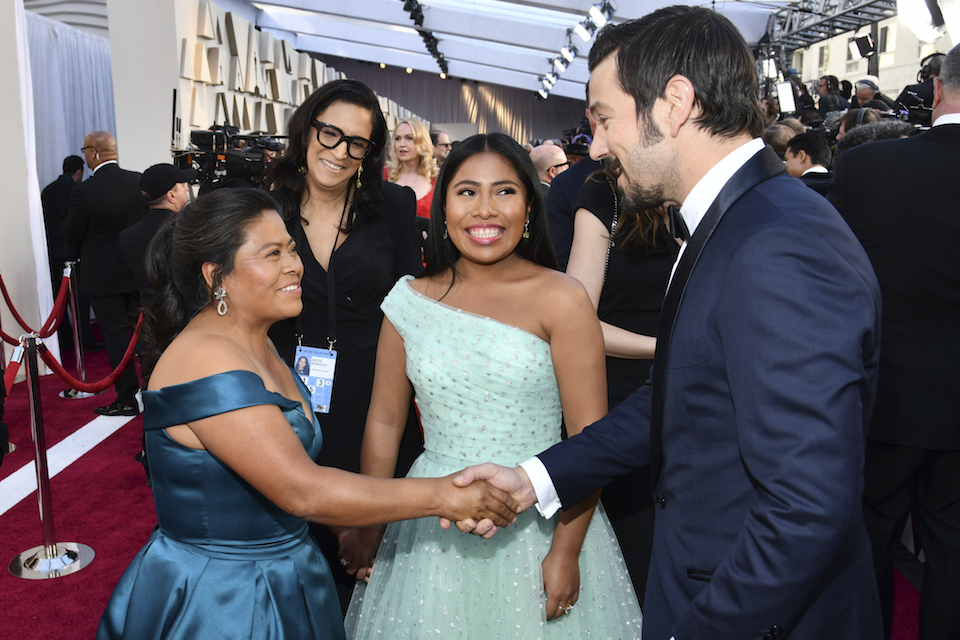 Margarita Martinez Merino, left, shakes hands with Diego Luna, right, as Yalitza Aparicio looks on during arrivals at the Oscars on Sunday, Feb. 24, 2019, at the Dolby Theatre in Los Angeles. (Photo by Charles Sykes/Invision/AP)The inclusivity of the winners Sunday stood in stark contrast to the #OscarsSoWhite backlash that marked the 2016 and 2015 Oscars.

Since then, the academy has worked to diversify its largely white and male membership, adding several thousand new members and opening the academy up internationally.

Still, this year's nominations were criticized for not including a female best director nominee or a best-picture nominee directed by a woman.

Though the once presumed front-runner "A Star Is Born" saw its chances flamed out, it won, as expected, for the song "Shallow," which Lady Gaga and Bradley Cooper performed during the ceremony.

As she came off the stage, Cooper had his arm around Gaga as she asked, "Did I nail it?" 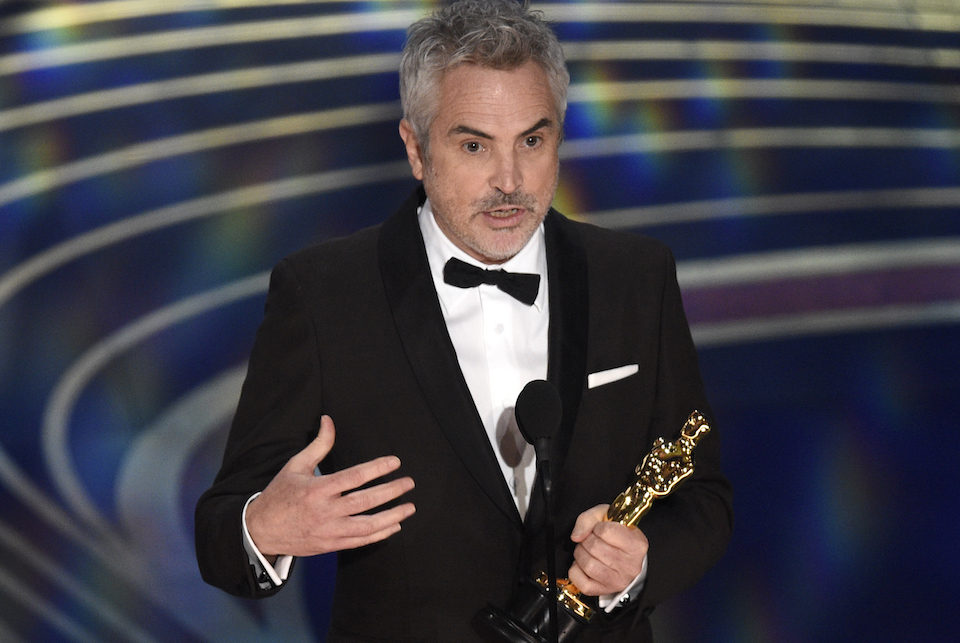 Alfonso Cuaron accepts the award for best cinematography for "Roma" at the Oscars on Sunday, Feb. 24, 2019, at the Dolby Theatre in Los Angeles. (Photo by Chris Pizzello/Invision/AP)

Adam McKay's Dick Cheney biopic "Vice" won makeup and hairstyling for its extensive physical transformations. The category was one of the four that the academy initially planned to present during a commercial break and as its winners — Greg Cannom, Kate Biscoe and Patricia Dehaney — dragged on in a litany of thank-yous, they were the first to have their microphone cut off.

To turn around ratings, Oscar producers pledged a shorter show. In the academy's favor was a popular crop of nominees: "Bohemian Rhapsody," ''A Star Is Born" and, most of all, "Black Panther" all amassed huge sums in ticket sales.

Typically, when there are box-office hits (like "Titanic"), more people watch the Oscars.