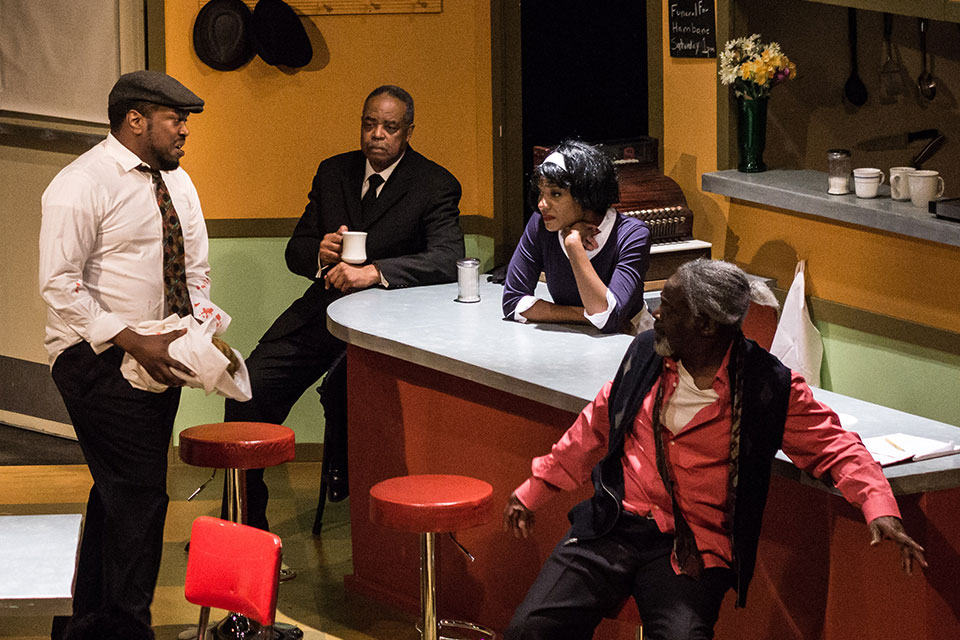 It isn't only on stage in the dialogue of the characters that the themes of August Wilson's award-winning play, "Two Trains Running," get explored. The ideals of determination, persistence and resilience also revealed themselves in the capricious process of getting this production ready for its month-long run at the Interstate Firehouse Cultural Center.

Four-hour weekday rehearsals, which began Jan. 30, stretched to eight hours on Saturdays and six on Sundays. PassinArt: A Theatre Company recruited from Texas the play's director, William Earl Ray--who has been directing and performing on stage for 40 years. During rehearsals, Ray was brutally honest and relentless in making sure the actors met his expectations.

"You need to counter her," Ray instructed Portland-based actor James Dixon, who plays Sterling, who was just released from prison on a bank robbery conviction. Throughout the play, Dixon's character clumsily tries to woo the belittled waitress, Risa, masterly performed by experienced film and stage actress Cycerli Ash of Atlanta.

Ray continued: "You need to move quicker when she says, 'Go on, Sterling' ...and then I need you to stop fidgeting. This ping pong shuffling, you need to get over that."

The play, with its profound metaphors and intense language, was written to reflect a slice of life in the midst of the Civil Rights movement. At that time, racial tensions were high. Urban renewal programs were forcing black people and the black-owned businesses that depended on them out of their neighborhoods. And, hastily organized rallies brought people into the streets to send up a call for justice to the new president in the White House.

And, then there's now: 2018 and America has a relatively new president. Black Lives Matter rallies across the country are demanding justice for marginalized communities. And Portland, where city policies have endorsed the razing of hundreds of Black homes since the 1950s, is now one of the top U.S. cities pushing Black and low-income people outside of its core neighborhoods and into the margins.

"Ain't nothing gonna be left around here," noted the play's central character, self-made businessman Memphis Lee, portrayed by stage veteran Wrick Jones. "Supermarket gone. Two drug stores. The five and 10. Doctor done moved out. Dentist done moved out. Ain't nothing gonna be left but these (folks) killing one another. That don't never go out of style."

The deeper meaning of the play's title "Two Trains Running" refers to the tracks of life and death, and how we all, at one point, ride them both. To emphasize that point, one of the characters, West, is a funeral director and land owner, portrayed by Jerry Foster, artistic director of PassinArt. At the same time Foster is acting in "Two Trains Running," he is also co-directing “And in This Corner Cassius Clay,” produced by Oregon Children’s Theater.

PassinArt is also partnering in May 2018 with the Rose Community Development to produce a play “Repulsing the Monkey” by Michael Eichler, which is about the impact of gentrification on White business owners. PassinArt is the oldest African American producing theater company in Oregon. It was established in 1984 with a mission to entertain, educate, and inspire artists and theatergoers, while celebrating Black culture and highlighting critical issues that impact the Black community.

"We talk about gentrification and how it displaces families, “ Foster said. “but, it also displaces businesses, which impact the overall health and sense of community.”

This is the fifth time that Ray, a Texas resident, has been a part of a "Two Trains Running" stage production. Most of his experiences were as the character Memphis, who is being forced by the city to sell his restaurant to make way for urban renewal. Memphis' eatery, though, has been a gathering spot for black residents to find connection, share gossip and make sense of their lives, while dealing with discrimination, poverty and city-sanctioned displacement.

"I love this play," Ray said. "It's one of my favorites by (Wilson) because it's so dense in its language and the humor in it is just fascinating."

PassinArt's production is the second time that unforeseen circumstances have forced Ray to move out of his director's chair in order to replace an actor on stage just before opening night. Ray says it took him about a week to memorize half of the lines of the steady character of Holloway. He plans to be completely off book well before the show ends April 1.

"With August Wilson, it's not easy to do his plays," Ray noted. "You've got to get it into your body."

Before directing any production, Ray said he listens to jazz and rhythm and blues music in order to set a certain mood with how the play’s seven characters "of loud voices and big hearts" interact. "This play for me is like a symphony and each character is a musical piece," Ray said. "How they fit into that is on their own terms. I'm just trying to stage it; you need to find your own way."

Actor Tim Golden, a Walla Walla resident, said he sees his character of Hambone as a microcosm of the Black experience in America. Every day for nine and a half years, for example, Hambone has been demanding a ham in exchange for painting a fence for Mr. Lutz, owner of a meat market across the street from Memphis' restaurant. Each time he demands a ham, Hambone is offered a chicken, which he refuses. His passionate shouts of "I WANT MY HAM!" within the safe and familiar confines of the diner is a ritualistic rallying cry against systemic oppression.

"He exists in this tragic space between a promise that was made and a promise that remains unfulfilled," Golden explained about his character's motivation. "He has an undying sense of passion in the face of overwhelming despair....What makes him a hero is that he is determined to keep trying."

In his off-stage life as an experienced criminal defense attorney and philosophy professor, Golden directs the Donald Blake Center for the Study of Race, Ethnicity and Culture at Walla Walla University.

He is also known in theater circles for his performance of "Thurgood," a one-man play about the life of attorney Thurgood Marshall, the first African American justice for the U.S. Supreme Court.

Golden said he was cast in the role of Hambone nearly three years ago in Philadelphia, but he had to relocate and couldn't be part of that show. So, he had been studying this character since then, and taking acting classes. He says his goal is to perform in all 10 of August Wilson's plays. He previously had been cast in "Fences" and "Piano Lesson."

"This is the most important work that I will ever do," Golden said.

"It's great for someone who is new to acting, like me, to have access to the caliber and quality of theater professionals that I’ve had access to with this production. It has really helped me grow and learn as an actor."

Although the other characters in the play acknowledge they don't fully understand the reasoning behind Hambone's persistence, Holloway offers context into the depth of each character's mindset, including references to a regular Wilson character of Aunt Ester, who doesn't actually appear on stage in this play, but conversation between the characters regularly debates whether her age is 322, 349 or even 500.

The references to Aunt Ester may be a subtle reference to the number of years that African Americans have endured similar injustices, which makes the themes of this play, written in 1990 to reflect the racial turbulence of 1969, still so relevant. In the end, the symbolism of the ham that Hambone so persistently demanded throughout most of the play is reflective of the sheer determination of African

Americans to persist despite the odds. And the world that the playwright Wilson created in Memphis' diner is a celebration of the humanity of ordinary Black people who grieve, love and laugh - in spite of it all.