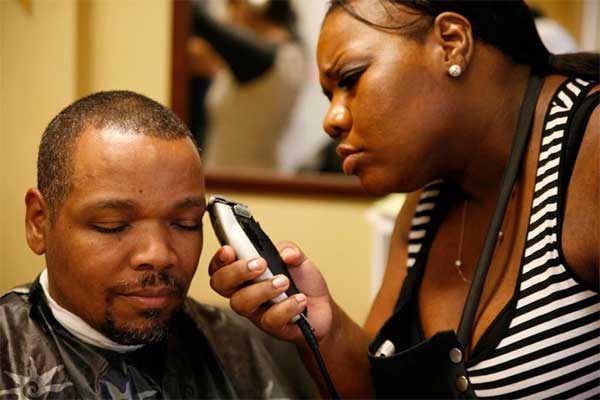 The Hollywood Beauty Salon is located in Germantown, PA, an area of Northwest Philly founded by settlers from Germany back in 1683. Today, the town is predominantly African-American as are most of the folks you'd meet at this unique establishment.

What makes this hairdresser different is that its patrons and staff members are all in recovery from mental illness and/or dependence on drugs or alcohol. Shot over the course of four years, the movie chronicles the camaraderie among the cosmetologists and clientele, while simultaneously telescoping on the touching life stories of seven of the shop's regulars.

There's Rachel "Hollywood" Carr, the proprietor, a single mother of three who battled anxiety, depression and Post-Traumatic Stress Disorder before becoming a Recovery Guide and a Certified Psychiatric Rehabilitation Practitioner. At the salon, she not only serves as a counselor but as a cosmetologist.

Rachel's protege "Butterfly," a recovering schizophrenic, exhibits considerable promise at braiding hair. The optimistic mother of three explains that she picked her nickname because she's begun to blossom after being in a cocoon marked by depression and paranoia. Still, she misses her murdered big brother and worries about an incarcerated son.

65 year-old Edward, a college grad, recounts how, at 26, his life was derailed when he was diagnosed as a paranoid schizophrenic. A classically-trained flautist, he nevertheless holds onto his dream of one day playing with a professional orchestra.

The spa's second in command is Darlene, a survivor of child abuse who recounts how she was teased mercilessly growing up about her hair, her looks and for being in the foster care system. One of her customers is shown taking delight in being taught to read, while another proudly pronounces "I am not my symptoms, I am not my diagnosis."

The Hollywood Beauty Salon was directed by Glenn Holsten who is perhaps best known for another stellar documentary set in Philadelphia, The Barefoot Artist. He's done it again, here, with this moving collection of poignant personal portraits powerfully illustrating the utter indomitability of the human spirit.