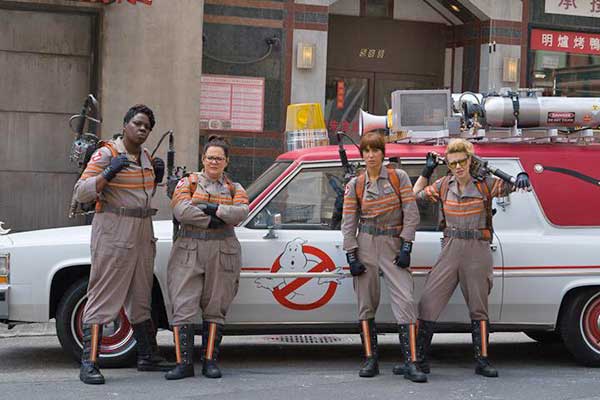 Released way back in the summer of '84, Ghostbusters raked in almost a quarter-billion dollars at the box office, making it the most successful comedy of the Eighties. Enough time has apparently passed to remake the much-beloved farce, though director Paul Feig (Bridesmaids) has seen fit to tweak the plot, starting with changing the gender of the leads from male to female.

Wisely, Feig has not only tapped a quartet of consummate comediennes in Melissa McCarthy, Kristen Wiig, Kate McKinnon and Leslie Jones but crafted a script which plays to each of their respective strengths. The upshot is a hilarious reboot that pays homage to the first film while remaining refreshingly unique in its own right. Plus, the movie features surprisingly-amusing appearances by original cast members Bill Murray, Dan Aykroyd, Sigourney Weaver, Ernie Hudson and Annie Potts in new roles.

The point of departure is stately Aldridge mansion in Manhattan, where we find a tour guide (Zach Woods) inadvertently releasing the disembodied spirit of Gertrude Aldridge (Bess Rous), a serial killer who had been permanently locked in a dungeon and fed through a slot in the door after killing all of her family servants in 1894. An attack by the evil apparition prompts the slimed victim to enlist the assistance of Abby Yates (McCarthy) and Jillian Holtzmann (McKinnon), Professors of the Paranormal at the mythical Higgins Institute of Science.

The eccentric academics are gung ho to explore the haunted house, despite the fact that they have been unable to prove the existence of any apparitions. En route, they pick up Abby's estranged BFF, relatively-skeptical Columbia Professor Erin Gilbert (Wiig), and Patty Tolan (Jones), a token booth clerk scared by a spook she saw in a subway tunnel.

But the fallout from bad buzz causes all the profs to lose their jobs. Undeterred, they proceed to turn a loft above a Chinese restaurant into a research lab, hire a handsome, half-witted secretary (Chris Hemsworth) and convert a hearse borrowed from sassy Patty's mortician uncle (Ernie Hudson) into the official Ghostbusters mobile. Cue the resuscitated, Oscar-nominated theme song.

Soon, these self-proclaimed "Conductors of the Metaphysical" develop an arsenal of high-tech gadgets ranging from ray guns to a ghost shredder to a motion-activated proton glove. And not a minute too soon, since the next thing you know, New York City is being invaded by an army of menacing apparitions.

A laff-a-minute, female empowerment fantasy far funnier than the original.