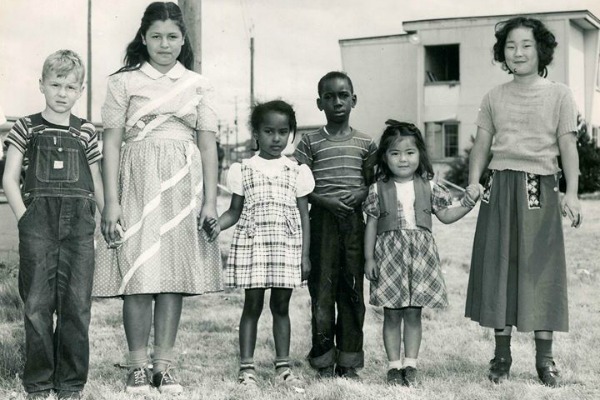 Vanport, Oregon was established in 1942 on lowlands located between Portland and the Columbia River. At its height, the hastily-constructed public housing project had about 40,000 inhabitants, most of whom were hired by the military to work in shipyards in nearby Portland and Vancouver.

After the war ended, it proved to be an attractive destination for African-Americans families who appreciated that the town was integrated and that it offered a higher quality of life than what they'd experienced in places like Arkansas, Oklahoma and Louisiana. A big negative, however, was the series of sluices slicing through the city serving as an ever-present reminder of the precarious nature of its existence.

For, there was always the possibility that a dike might give out, a fear that turned into a frightening reality at 4:05 pm on Sunday, May 30, 1948. Heavy snows followed by an unusually warm spring combined to flood the town by nightfall, claiming 15 lives while leaving the rest of its citizens homeless.

The Wake of Vanport is a very moving documentary featuring archival photographs of the Memorial Day disaster, as well as the wistful remembrances of a number of survivors. Belva Jean Griffin, who was 21 at the time, recounts how her parents had received unreliable assurances that the dams would hold. Consequently, she lost everything she owned except an album of family photos.

Regina Flowers, reminisces about how there was no racial strife among the kids in Vanport when she was growing up, although there was some among the adults. Paula Hartman recalls that only whites received advance notice about the impending deluge in a handbill that read:

"Remember: Dikes are safe at present.
You will be warned, if necessary.
You will have time to leave.
Don't get excited."

Lily Raxter recollects watching a black lady with a couple of huge suitcases being swept away by the all-consuming current. And Marge White talks about immediately falling in love with Vanport upon arriving from Tallulah, Louisiana in the fall of '44. Together, this touching collection of truly heartfelt remembrances paint a poignant portrait of a short-lived, idyllic oasis.