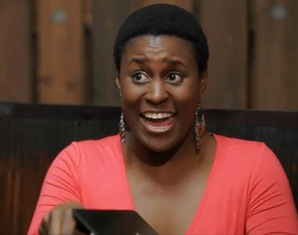 The show hadn't won the popular vote, but the judges selected it to win; some commenters said media attention around the death of Trayvon Martin was at the root of the win.

"The backlash was pretty intense," Rae said about the comments made by fellow competitors. "I'm glad they didn't win, they didn't deserve to, by any means."

Although negative comments are nothing new for the 27-year-old actress, Rae said, what others had to say never bothered her until now, especially with the recent social media furor over some of "The Hunger Games" characters being black.

"Everything is so clear right now, after 'The Hunger Games,' I started taking it more seriously," she said. "In a sense that's what they wanted, for me to be all beat up by it, but I refuse."

Knowing this issue was much bigger than her alone; Rae said she was compelled to say something about it. So, a few of weeks ago she took her thoughts to xojane.com where she wrote about the influx of racism floating around the webisphere.

"Users hide comfortably behind their computer screens and type the most obnoxiously offensive things they can think of and thirstily WAIT for an angry response; a validation of their modest efforts," she wrote.

Rae said she's all for promoting open dialogue online, but the Internet has become a place for small communities to spread racism and racists should pay for their actions.

Her attitude: I'm rubber and you're glue.

Rae said she hadn't intended to enter the Shorty Awards, but after noticing the amount people rooting for her, she thought they might have a chance to win.

"It was completely a surprise. I heard about the awards and I started seeing on Twitter people were nominating us and in the final weeks I tried to make the top five," she said.

The success of Rae's show relied heavily on the Internet, where open dialogue is accepted regardless of how taboo it may be.

Even the main character in the series, an awkward black woman named J, uses the N-word in her thoughts and when she raps - it's her therapy, the character explains in the show.

"J uses the word in her head," Rae said. "She's never called anyone that face to face - it's about her thoughts."

Rae said there is nothing funny about hateful speech and she believes there is a difference between using words for malicious purposes and using words to make people laugh.

"For our series, the entire purpose is to satirize hateful speech," Rae said. " J embraces the hip-hop culture, and hip-hop uses language that is offensive, homophobic. Her use of it demonstrates how stupid it is. I personally don't believe in trying to get rid of a word. It doesn't seem as effective - it'll make them want to use the word more."

As for making sure people get the joke, Rae said viewers will not hear an explanation in the script.

Poll: Are you OK with comedians using the N-word?

But if people have questions, all they have to do is ask her online, she said.

"One thing I love about the show being online is that there's instant feedback and discussion from the viewers. If you watch the show and you don't understand something or you don't like something, you can express that anywhere," Rae said.

"I'm a social media addict. I read all of the comments and I am completely open to discussing any and all decisions we make for the show. If an episode facilitates discussion, then I'm happy. If you want an explanation, then I'm happy to give it to you."

"I think it's great for creation because it's brought about awareness. The bad press has led many to my show," said Rae, whose team just finished writing the first episode for the second season. "I thrive on obstacles. If I'm told that it can't be told, then I push harder. They are creating opportunities for us as long as they continue to be racist."