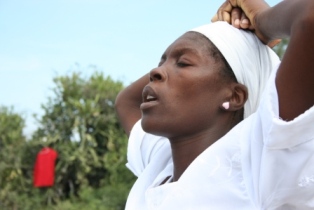 From artistic expression in Harlem and in Haiti to youthful hopes of overcoming war and poverty in Sierra Leone and Colombia, the third season of AfroPoP: The Ultimate Cultural Exchange transports viewers into the lives of men and women from different corners of the African Diaspora.

Highlighting the use of art as expression and the human rights crises affecting people in the Pan-African world, the five-week series premieres on January 12, 2011 at 7 pm (ET) on the 24-hour documentary channel, World. Viewers can also view filmmaker interviews and other special content on WORLDcompass.org.

In 2011, AfroPoP brings to public television eight diverse documentaries about members of the African Diaspora in Haiti, the United States, Colombia, Jamaica, South Africa and Zimbabwe. The series, which airs on Wednesdays, kicks off on the January 12 anniversary of the catastrophic Haitian earthquake with two films focusing on Haiti. Haiti: One Day, One Destiny follows filmmaker Michele Stephenson as she travels to the island six weeks after the devastating earthquake and tells the story of the tragedy from the Haitian perspective. Taking a closer view of the Haitian experience in the U.S., "The Other Side of the Water" looks at rara music, traditional folk music used in street processions, and the Haitian musicians using it to help preserve their cultural identity in a new land, despite the controversy over its ties to Vodou (Voodoo).

Find trailers for the films, view the documentary 'A Day Without Mines', which follows filmmaker Adisa Septuri's mission to provide child laborers in Sierra Leone with scholarships and a soccer tournament, and much more at www.blackpublicmedia.org

PHOTOS: The Skanner Home page photo: DJA-Rara on the Streets by Kristin Luce

Woman in White from One Day, One Destiny  BlackPublicMedia.org, the official website of the National Black Programming Consortium (NBPC).