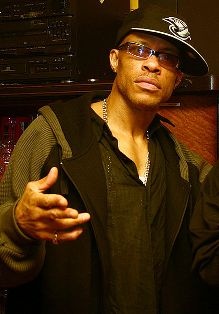 NEW YORK (AP) -- Guru, the influential rapper known for his intellectual themes, his monotone delivery and his combination of jazz sounds with hip-hop beats, has died after battling cancer, collaborators said. He was 43.
The world has lost "one of the best MCs and hip-hop icons of all time," according to a statement from Solar, Guru's producer. It was posted on the official fan website of DJ Premier, who with Guru made up the rap duo Gang Starr. The statement said Guru died Monday.
E-mails from The Associated Press to Solar and his assistant were not immediately returned.
The statement also features a letter Guru wrote before his death. In it, he thanks Solar for his friendship, speaks about his son KC and his nonprofit cancer organization, Each One Counts.
He also dismissed his relationship with Premier, saying, "I do not wish my ex-DJ to have anything to do with my name."
"I write this with tears in my eyes, not of sorrow but of joy for what a wonderful life I have enjoyed and how many great people I have had the pleasure of meeting," it read.
Hip-hop artists from both coasts mourned Guru's death and noted that he would forever be linked to Premier. On Premier's website, many posters are questioning the authenticity of the letter, saying it doesn't read like something Guru would have said.
"I think Guru, I think Gang Starr and all of the dope things they did," rapper The Game said in an interview Tuesday in Los Angeles. "He really did amazing things ... And him passing, man, it's just crazy. I just wish him peace on his way, on his journey to God, man. Hip-hop lost another legend."
Guru, whose real name was Keith Elam, was born near Boston and later moved to New York. His first album as a member of Gang Starr, "No More Mr. Nice Guy," was released in 1989. They released five more albums as a duo, including the gold-selling "Moment of Truth" in 1998.
The group's first hit was "Words I Manifest," which samples Miles Davis and Charlie Parker's "A Night In Tunisia." Other hits include "Dwyck," "Just to Get a Rep" and "Take It Personal."
Guru began collaborating with others outside Gang Starr in 1993, releasing "Jazzmatazz, Vol. 1," which featured a blend of jazz melodies and hip-hop sounds. He released four volumes of the "Jazzmatazz" series.
Guru worked with top musicians including Herbie Hancock, Isaac Hayes, Chaka Kahn, Erykah Badu, The Roots, Common, Jamiroquai, Macy Gray and Damian Marley.