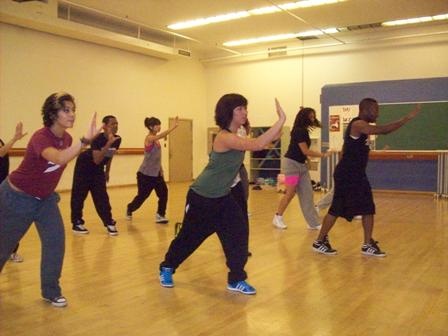 A sell-out crowd is expected Friday, April 16, at the Urban Arts Dance Company, which is celebrating its fifth anniversary with a Spring concert, "Pulse," 8 p.m. at the Newmark Theater, 1111 SW Broadway in Portland.
"Pulse" explores the connection between music, movement and everyday life through a range of dance genres, presented by this exciting troupe of young artists led by choreographer Dana Ingram.
Tickets are on sale now for $15 / $20 at the PCPA Box Office located at 1111 SW Broadway, Portland, OR, at all Ticketmaster outlets and online at www.ticketmaster.com.
A pre-show mixer is in the lobby at 7 p.m.
Lifelong Northeast Portland resident Dana Ingram started the company from scratch.
"I was part of the Northwest Afrikan American Ballet, I danced with them since I was a sophomore in high school," she said.
"That disbanded in 2002, and then there was a void because I had been dancing for 12 years. I was used to dancing every day."
At the time, Ingram had already started another dance program at the Boys and Girls Club called the High Steppers Drill and Dance Team. There, the elementary-age children learned beginning dance basics.
"They were so small I couldn't get choreography into them," Ingram says. "The whole performance experience was what I was missing."
So she asked a few old friends from the Pacific Northwest Afrikan American Ballet if this was something they would be interested in, and they said yes.
Together with her friend Janelle Yarbrough, Ingram put together a summer dance program for teens. They put out the word to the local community and recruited about 50 participants. The curriculum included Brazilian, African, jazz and hip hop dance.
"They were there for five hours a day, four days a week for five weeks," she said. "We had a real successful summer."
They held a showcase at the program's end, which was such a smash the two women went right out and incorporated as a professional dance company, Ingram said, keeping with the essential ingredient of youth outreach.
That was five years ago, and the Urban Dance Company has only grown since. Now their goal is to find their own studio.
"We've been using donated space from SEI and Jefferson High School, which has been important for us," she said. "But the tradeoff is that we have severely limited times per day when we can use the spaces, and only certain times per year.
"We want to accept kids at younger ages at start training for young people who have no dance experience," Ingram said. "If we can grow into our own space, then we can begin to really build dancers – some of these other dance companies train young people from the age of five."
You can make a contribution to the Urban Dance Company any time by going to http://www.urbanartsdance.com and clicking on the "support" button.