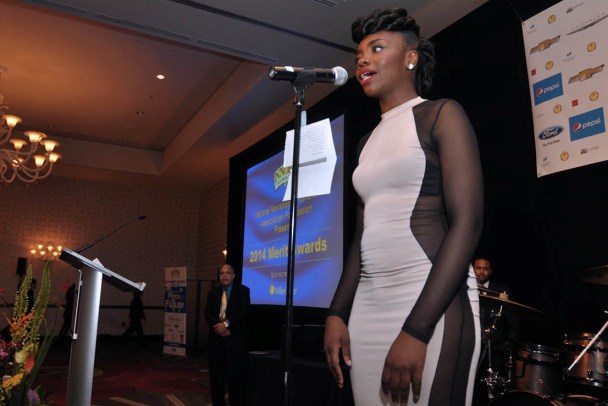 Tamara Stephens has been singing since she was four-years old. She started off singing gospel in church, and at age 8 was discovered by Linda Hornbuckle.

"She'd bring me along to shows or festivals and let me have the stage," Stephens told The Skanner News. "That built my confidence. Linda is a mentor of mine; she's  a sweetheart. I absolutely love Linda."

Stephens stopped singing for a while during her self-conscious teen years, but started again about three years ago, she said, this time with a focus on R&B and soul. And true to form, she went straight to the top.

"I hit the stage with my ex-husband Errick Lewis at Jimmy Mak's," she says. "We did a song called "There" that we wrote together. And since then I've never stopped performing. I've even been on stage in LA."

As well as beloved local musicians such as Hornbuckle and piano genius Janice Scroggins, who recently passed away, Stephens has been influenced by the likes of LaRhonda Steele-- "a huge influence," -- Lalah Hathaway,  Brandi and Roberta Flack. And of course Liv Warfield.

"Everyone is looking up to her now," Stephens says. "She has really put Portland on the map."

The hip hop revolution didn't totally pass Stephens by, however. She says her guilty pleasure is "hard-core rap,"  so she has to turn down the volume on the x-rated lyrics when her kids are around. And she's excited about an upcoming  visit to Seattle to see Jay Z and Beyonce in concert.

A student at Warner Pacific University, where she is studying Human Development, Stephens says she has considered becoming a therapist because she is fascinated with how people think and why we do the things we do. But her current day job is as a contract specialist with an insurance company. And as the mother of a four-year-old she has her hands full.

But now she's found her way back on stage, she says she's ready for whatever success comes her way --even if that someday means moving to a bigger city.

Meanwhile she's recording an album with her band The Tamara Stephens Experience, scheduled to be released next Spring.

"I'm very critical of my own work. I have to play stuff over and over and make sure it's right before I can let the world hear  it."