San Francisco's Black Community -- Where Did We Go? 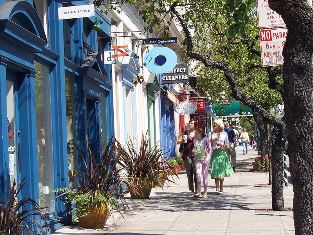 Ed.Note: This is the first installment of an occasional series that looks at San Francisco's African American community.

It's raining outside, and I'm perched in front of a 3-story Victorian. I have been for an hour. As I smoke a cigarette and look up at this beautiful Victorian I am taken back to a time when this very house was mine.

There are vivid memories of my childhood, which was briefly spent in that beautiful home, located in the Fillmore district right next to Duboce Park. My grandfather had helped build it many years ago. The house was no indication of wealth -- something my Dad had made a point of telling me growing up. They were far from rich. My grandfather was a preacher at the Western Addition Baptist Church and my grandmother was a stay-at-home mother, so the main source of income came from my grandfather, who made just enough for them to get by.

The house would come to be a place of refuge for the whole family once my grandparents both died and left it to their oldest daughter, my Aunt Beverly. With my Uncle John in one bedroom, my Aunt Beverly and her three adult kids filling up the others, my Dad and I were relegated to living in the basement. Eventually, drug abuse would lead to my Aunt losing the house and the family being split up and scattered across the city, forced to live in housing projects. This all happened in 1998. I was four years old.

My neighborhood as I remember it was populated mostly by African-Americans, long before the days when hipsters grazed on the sprawling hill of grass a block from my window. There were less than a handful of coffee shops. Imagine that. The neighborhood, like many other black neighborhoods in America, was home to a lot of violence, crime, and drug-abuse, but it was my home, and despite these seemingly scary traits, felt cozy. Whatever violence went on beyond our tall, imposing walls couldn't penetrate our grand Victorian home, which felt even grander as a child half the size I am today. There was a feeling of protection because I had my family around me at all times.

While there was violence in my neighborhood, there was also a strong black middle class, and the differences between us and them became etched in my young brain. The differences were easy to spot. Middle class kids were sent to St. John's, the Catholic elementary school on Geary Blvd. I went to John Sweat, in the heart of one of the Fillmore's most notorious housing projects. They usually had the luxury (one of which I was particularly jealous) of getting all the cool new shoes -- Jordans, Nikes, etc. -- that came out, as well as nicer cars and such. The wealthier kids would often make fun of the fact that I wore cheaper clothes and hand me downs. But on the other hand, us poorer kids made fun of them for being spoiled. The difference being that our mocking them was out of jealousy.

Duboce Park was a place where young black kids from the neighborhood would hang out in the grass and play music from their boom boxes, play pick-up basketball games on the court, try their luck with the ladies (using pick-up lines that were guaranteed to be unsuccessful) and maybe even catch a dice game. Nowadays, spotting another African-American in Duboce is so rare that in the unusual case you do, the two of you are almost required to acknowledge each other when you pass by, with an awkward head nod or maybe even an, "Alright now, brotha." More often you see young professionals with bellies full of organic breakfasts and expensive coffee from Duboce Park Café (which used to be home to a neighborhood corner store), all while walking their hypoallergenic dogs.

What hurts the most is walking past the old house that my grandfather built, and seeing it occupied by a white family who gave it the most hideous paintjob on the block and probably remodeled the inside as well. This alone is part of the reason I no longer feel at home in the Fillmore, let alone any part of San Francisco.

So where did we go?

After constantly moving around from different housing projects across the city and even briefly living in Oakland, my Dad and I finally settled down in the Army Street housing projects in the Mission District of San Francisco. This was a predominantly black part of the neighborhood, and also home to many Hispanics, as the Mission District is known for its Hispanic influence. From the age of 9 to 13 I lived at the Army Street projects, before moving into a group home where I would finish high school.

During that time, I would sometimes come back to my neighborhood to hang out with old friends, and I began to notice the same thing happening to my new neighborhood in the Mission -- there seemed to be less and less black people. I began to ask around, curious to know where all these people were moving. I was surprised to find that a lot of the black families were moving to places like Sacramento, Antioch, Fairfield, and other places across the East Bay, where they probably got better deals on housing. Even my own family has moved away from the city. My aunt now lives in Las Vegas with her children and grandchildren, and my uncle lives in Waco, Texas. The only family I have left in San Francisco is my Dad, who lives in the Tenderloin in a low-budget hotel because he is unable to afford housing anywhere else in the city.

It is tough having to accept the fact that San Francisco is no longer as diverse as it once was. Walking around the Mission District, I sometimes feel I may be the only black person in the whole area. I can very much sense racial tension when I am in certain parts of the city that I once called home. It is sad that my beloved city, one of the most beautiful and unique places in the world -- a place known for welcoming gays, lesbians, African Americans and everybody else -- is beginning to feel less welcoming to me.