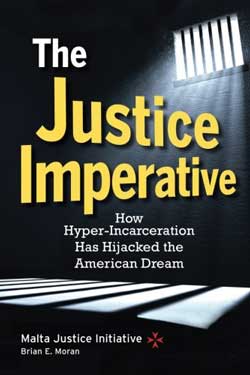 PHOTO: The Justice Imperative: How Hyper-Incarceration Has Hijacked the American Dream book cover

Book Review by Kam Williams
The Justice Imperative: How Hyper-Incarceration Has Hijacked the American Dream by Brian E. Moran, Esq.


“Our criminal justice system is in need of reform. [It] costs the taxpayers too much, fails at rehabilitation, exacts a life-long toll on offenders, and does not yield corresponding social benefits.

The purpose of this book is three-fold: (1) to provide information about the causes and extent of the problems overwhelming the process of criminal justice… (2) to explain why reform is long overdue and in our collective best interest… (3) to suggest reforms that are supported by empirical evidence…

As a society, we have become hardened toward felons… [But] it is in the public interest to have released offenders rehabilitated… By recognizing the human dignity of all offenders and enabling them to realize redemption and restore their relationships within the community, all of society is ennobled."

-Excerpted from the Foreword by William J. Fox (pages i-iii)

Today, about 2% of our working-age men are behind bars, most for non-violent offenses, giving the country the highest incarceration rate of any nation in the world. Unfortunately, taking this tough stance on crime has come at quite a societal cost.

For, not only is it expensive to house inmates, at over $50,000/year in Connecticut, but there is plenty of evidence that it is failing miserably in its efforts to rehabilitate offenders. Consequently, the State has a high recidivism rate, with over half of its ex-cons returning to the correctional system via a virtual revolving door.

That is the contention of Brian Moran, lawyer and author of “The Justice Imperative: How Hyper-Incarceration Has Hijacked the American Dream.” Although the book’s focus is on Connecticut, what’s transpired there proves to be par for the course.

This opus points out that the policy of treating juvenile delinquents like adults has been counterproductive, since “it is more likely that an African-American boy who drops out of high school will be arrested than get a job.” It further laments that “one in every three black males born today can expect to serve time in prison.”

Mr. Moran, as a member of the Malta Justice Initiative, suggests a host of reforms to “The New Jim Crow,” as dubbed by Michelle Alexander, starting with making it easier for parolees to find gainful employment. And the group’s other solutions include reserving incarceration for violent offenders.

The goal: to reduce Connecticut’s spending on the prison system, to reduce its prison population, to reduce its recidivism rate, and to close half its number of prisons. An admirable initiative spearheaded by a visionary attorney wise enough to seek out the bipartisan support necessary to implement the urgently-needed changes.

To learn more about the project visit: www.TheJusticeImperative.org