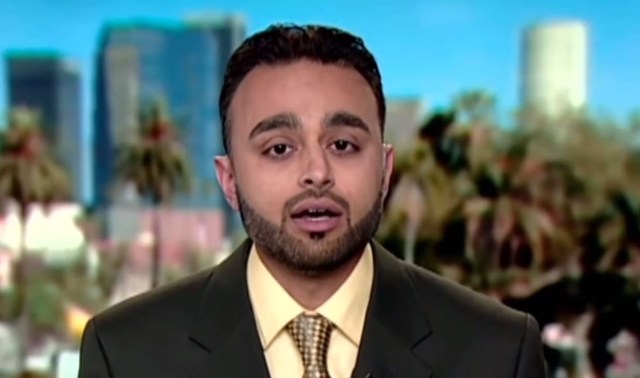 Harris Zafar of Beaverton is the national spokesman for the Ahmadiyya Muslim Community USA and is its National Director of Youth Outreach. As a frequent guest on Fox News, he presents a moderate voice for Islamic communities – a courageous thing in the current political climate around the world.

The Skanner News spoke with Zafar on his new book, “Demystifying Islam: Tackling the Tough Questions.”

The Skanner News: Mr. Zafar, the world knows you as a champion of moderate Islam – even when you’re being grilled about it on national television.

Harris Zafar: Those are very kind words. That's what I try to do, in the midst of a very polarized media situation -- is bring some sort of balance and reasonable discourse to the conversation. When it comes to what's happening in the Muslim world, or accusations about Islam, there's often a very polar opposite of ultraconservative views on matters, though I do try to bring a balanced, rational approach to the discourse.

TSN:  Before 9/11 was this a problem in the United States?

Zafar: I don't think it was, and I think primarily because people on a mainstream level were not exposed to Islam, Muslims, Middle Eastern affairs, and Middle Eastern conflict. It was really after 9/11 that this came into everyone's living room. Terms like Al Qaeda, Jihad, the Taliban -- all things that we have been very accustomed to hearing about in the Muslim world -- we knew about Osama bin Laden, Al Qaeda and the Taliban -- but it wasn't until after 9/11 that it became more mainstream knowledge. So yes I think the interest and the spotlight on Islam really came as a result of 9/11.

Regarding the view of Islam, both good has come out of that, and bad has come out of that. Good is that we have people with a genuine interest in wanting to understand what is the status of Islam, with what's the cultural, political and historical background in the Middle East that has led to such antagonism and such angst. They take a reasonable approach and try to figure it out.

On the other side there are those that are more antagonistic, and have taken this opportunity to really attack Muslims and Islam as antithetical to Western values and very aggressive in nature.

And as a result there has been a lot of confusion and misunderstanding and matters that are shrouded in mysticism and confusion, which is why I wrote this book.

TSN: It's obvious that there is a need for a more reasonable source of information for people who don't know that much about the Islamic world and Islam in United States. I want to ask you something a little different. What excites you about this book? You strike me as the kind of person that offers a banquet to the society not a baseball bat.

Zafar: Really the thing that excites me most is to be able to provide to the average non-Muslim American, the average American citizen, an easy-to-understand, concise and honest explanation of some of the more controversial aspects of Islam.

I had reached out to many of my friends who are non-Muslims, from many backgrounds, including many that are evangelical Christians, and asked what are the parts of Islam that cause them the most confusion or concern? And that feedback helped me shape the different chapters of the book.

So what excites me is that I can provide a very unique approach to dealing about Islam. Many books about Islam are very blatantly pro-Islam, and they come off as proselytizing about Islam.

And then you have some books where people are trying to demystify Islam from a non-Muslim point of view -- just basically saying why Islam is wrong, citing examples of Muslims around the world that have backward views, and behave in backwards ways.

So this is a unique approach that excites me in that I can be honest and forthright and confront the areas where some Muslims have erred, and why they act that way. So when we hear stories from Iraq, or recently in Sudan when the woman was arrested for converting to Christianity, I don't just condemn it. I give my audience an understanding of what basis some Muslims used to justify death penalty for apostasy.

I actually cite what their arguments are, and I systematically tear them apart to show how they have no basis within the teachings of Islam.

I may not be the stereotypical FOX News panelist but from my standpoint, the people who regularly and religiously watch FOX News are those I feel need to hear the message that I want to bring the most.

It's not just me, this is indicative of the Ahmadiyya Muslim Community worldwide; the course we take in religion is a very rational, logical course.

TSN: I only have one last question. You've written this book now; I predict you're going to write more books. What is the overall goal of your life's work?

So my goal is to use the truth of my deep study of my faith to not only call people towards understanding exactly what Islam is all about, but also generate a feeling of positive understanding of other people. The greatest reason why people hate others is because they don't know them well enough. And that's where the fear comes– when you don't know anything about someone, you can possibly begin to fear them or hate them.

So I want to build bridges of understanding and promote tolerance, so that we can get rid of this fear, anxiety, injustice and chaos – and hopefully one day be able to establish a world that is secure, peaceful, just, and in which people don't look at others who are different from them as being less than, or inferior, or foreign. I'm not trying to convert everybody to Islam, that's simply not my goal. My goal is to bridge these gaps where there is deficient discourse, by creating dialogue and creating understanding. You don't have to agree with each other, just understand one another, and accept one another for who we are.

Find out more about Zafar’s work at www.ahmadiyya.us and www.muslimsforpeace.org.